The U.S. Marshals Service was established in 1789 when President George Washington signed the Judiciary act into law. Washington appointed the first 13 U.S. Marshals, for each district within the United States at that time. Marshals were chosen and appointed based on their loyalty, leadership and dedication with the government. Early responsibilities of the Marshals included protection for the federal courts, enforce laws like the right to carry firearms, make arrests and conduct searches or seizures with warrants. Marshals also collected taxes and conducted the first nine federal censuses from 1790 to 1870. During the early history of the United States, the marshals were the primary law enforcement agency for the federal government and were responsible for enforcing criminal laws that existed during that time (Bumgarner, 2013).

The agency's history was largely shaped by societal events, such as slavery, where the Marshals were needed in order to investigate and apprehend violators of the Fugitive Slave Law of 1850. They were required to capture runaway slaves and return them to their masters. Early marshals were instrumental in the establishment of the United States. They played a huge role in enforcing the Sedition Act of 1798; in investigating suspected individuals for counterfeiting of federal currency; and were also instrumental in assisting the IRS during the Pullman strike in 1894 (Bumgarner, 2013).

During the late 1700s and 1800s, the Marshals Service played a large role in ensuring peace in the unsettled western portion of the U.S. Conflict between settlers and Native Americans persisted as the United States grew geographically. There was a large lack of strong enforcement in the unsettled areas. The need to escape law enforcement attention really encouraged those who wished to break the law to head out west, where they could avoid law enforcement. The role of the Marshals to help settle the Wild West contributed to legendary marshals such as Wyatt Earp, Edward and Bat Masterson and James Hickock (Bumgarner, 2013).

The U.S. Marshals Service became increasingly professional in the second half of the 19th century. In the 1870s they became part of the newly created United States Department of Justice. Marshals used to receive commission for the tasks they committed until 1896 when they began receiving a salary. Throughout history, many of the marshal’s enforcement responsibilities were dispersed to other federal law enforcement agencies such as, the U.S. Secret Service and the FBI. It is suggested that pursuing tax evaders was the most dangerous task performed by the marshals because it resulted in numerous marshal fatalities (Bumgarner, 2013).

1865- 1900- US Marshals played a large role in keeping law and order in the old west and they were involved in apprehending desperadoes such as Dalton Gang, Bill Doolin and Ned Christie.

1870- On July 1, Congress created the Department of Justice and gave it supervision over the U.S. Marshals.

1881- Near the OK Corral in Tombstone, AZ, the famous Marshal Virgil Earp and his brother Wyatt and Morgan, as well as gunman Doc Holliday, gunned down a group of “cowboys.” The movie Tombstone tries to depict this incident but it was very inaccurate in terms of the way Hollywood portrays the Earp family. This event was a good example of how marshals were needed in the U.S. expansion out west and how local sheriffs were in need of assistance wrangling troublemakers in their towns. 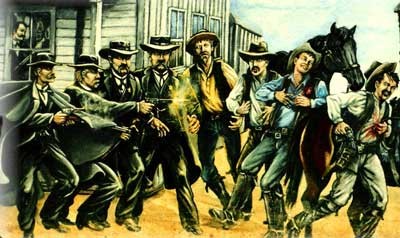 1919- During prohibition, U.S. Marshals arrested bootleggers and seized all of their equipment.

1956- The U.S. Marshals established an Executive Office in Washington, D.C.

1971- The Witness Security Program was established through the Organized Crime Control act of 1970.

1979- The apprehension of federal fugitives became the sole responsibility for the U.S. Marshals.

2005- The U.S. Marshals conduct their first “Operation FALCON.” Through this operation U.S. Marshals and their law enforcement partners conducted a nationwide clearance operation that resulted in the arrest of 10,340 fugitives and cleared more than 13,800 felony warrants. Operation FALCON removed some of the country’s most dangerous sex offenders and gang members from the streets. The idea of these operations is to get all law enforcement agencies to collaborate on executing high priority felony warrants. 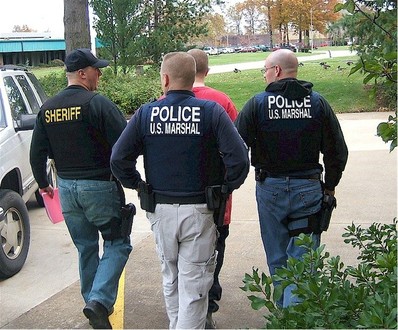